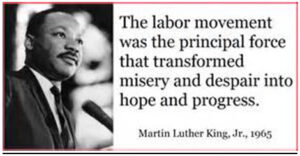 Most Americans know Dr. King as one of the greatest leaders of the civil rights movement of the 1960’s, however, Dr. King was equally as passionate in his devotion to the Labor Movement – for without economic opportunity, civil rights could not flourish.  His commitment to the American worker followed him until the day of his tragic death.  On the day of his assassination, Dr. King was in Memphis, Tennessee in support of striking AFSCME sanitation workers.  So in honor of Dr. King we offer these inspiring words from a speech he delivered to the Illinois AFL-CIO in 1965:

By Ira H. Weinstock, P.C. | Posted on January 20, 2020
« Merry Christmas and Happy Holidays from all of us at Ira Weinstock, P.C.
HOW MUCH DO I GET PAID UNDER PENNSYLVANIA WORKERS’ COMPENSATION LAW? »